You can find on this page the map of Paris tram. Paris tram is a transit system serving the city of Paris (France) with the subway, the urban, suburban & commuter train, the bus or the Noctilien night bus. The tram network has 7 lines and 148 stations forming a rail network of 51 miles (82 km).

The Ile-de-France tramway is made up of seven completely new lines and three lines are the result of the modernisation of older railway lines. Due to strikes, incidents or works, RATP or SNCF tramway traffic can be disrupted. The map of the Paris tramway, available online and downloadable in PDF format, shows which lines are operating normally. 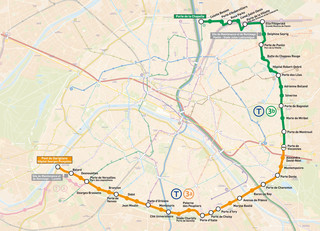 Its network includes the following 7 lines:

Paris had an important tramway network in addition to the metro and buses, which operated from 1855 to 1938 (until 1957 in Versailles).  Because of the many traffic jams caused by cars, public transport such as the tramway was favoured from 1970 onwards.