You can find on this page the map of Paris subway. Paris subway, tube or underground is a transit system serving the city of Paris (France) with the urban, suburban & commuter train, the tram, the bus or the Noctilien night bus. The subway network has 16 lines and 302 stations forming a rail network of 136 miles (220 km).

The Paris metro map is designed to make your journeys in Paris easier. The interactive map of the Paris metro is available online and can be downloaded in PDF format.

With RATP strikes, there may be many closed lines and stations that are not served. Disruptions are significant during strikes. To help you, the Paris metro map shows you all the Paris metro lines. 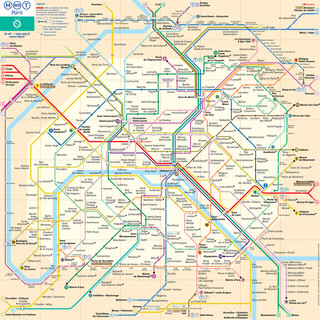 Paris subways which transport 1.5 billion passengers per year, exist since 1900 and are operated by the RATP (Régie autonome des transports parisiens).

Its network includes the following 16 lines:

The Paris metro map is a map showing the lines and stations of the Paris metro in France. The Paris metro has become one of the symbols of Paris, it is characterized by the density of its network and by its architectural style influenced by Art Nouveau.

The first line of the Paris metro was built shortly before the Universal Exhibition of 1900. The network will quickly become denser in intramural Paris until the Second World War. Most of the existing lines will be extended into the inner suburbs and will be completed from 1970 by the regional express network (RER).

The Paris metro inaugurated a fully automated line, line 14, to relieve the burden on RER line A. Line 1 is subsequently automated in 2011. A major project, the Grand Paris Express, is under construction from 2015 and plans to build 200 km of additional lines by 2030.

During a strike in Paris, metro traffic is very heavily disrupted with lines and stations partially open only during rush hours. For the automatic lines of the Paris metro (lines 1 and 14), traffic will be normal but passengers will suffer from saturation.