The twenty arrondissements of Paris all have their own character through their tourist sites, places to go out, restaurants, and homes. Each Parisian arrondissement has four administrative districts. 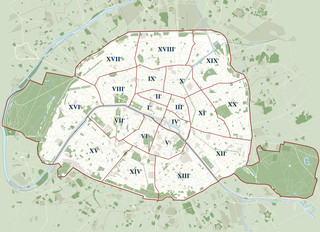 The division of Paris into arrondissements or districts dates from 1795 with a division into 12 districts and 20 districts in June 1859 .

Today, the arrondissements are: 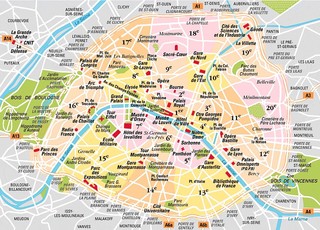 Paris reputation is made by its diverse neighborhoods, in which you will find monuments, squares or cultural venues.

The map of Paris districts invites you to discover on a synthetic map the historical areas of the capital such as the Royal Palace, the small streets of the Marais and the Latin Quarter. The Faubourg Saint-Germain was once located outside the walls of Paris and marked the beginning of the campaign. Our map of Paris districts helps you to find your way around the capital easily and quickly. And if you go to the south of Paris to discover the Chinese district? Unless you prefer to discover the picturesque district of Montmartre, which has retained some of its village soul.

Download or print out this map of Paris districts and keep it handy at all times. The district of Belleville, for example, bears witness to the expansion of Paris in the 19th century. You can use this free Paris district map to explore the city of light for yourself.