Parisian buses circulate throughout the capital and its suburbs day and night. The bus network completes the offer of public transport: metro, RER and tramways. The Régie Autonome des Transports Parisiens (RATP) operates this network. The organisation and financing of this network is the responsibility of Île-de-France Mobilités. With more than 300 lines and nearly 4,000 kilometres of rotation, Paris buses transport more than a billion Parisians and tourists every year. Our interactive Paris bus map is designed to make your journeys easier. The map is available online and can be downloaded in PDF format. 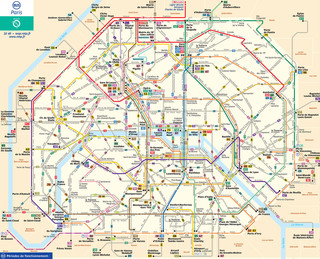 The Paris bus network which transports 1.3 billion passengers per year, exists since 1906 and is operated by the RATP (Régie autonome des transports parisiens). Its network includes 353 lines.

Presented at the 1905 Motor Show, the first bus line in Paris was inaugurated in 1906 and links the Montmartre district to Saint-Germain-des-Près over 6 kilometres. The car model chosen was the Brillié-Schneider P2, which ran on a petrol engine. In the 1910s, these buses replaced the horse-drawn buses.
In 1930, the STCRP (ancestor of the RAPT) was created to operate and develop this network. From 1950, with the rise of automobiles, the bus declined. Today, Parisians are encouraged to take public transport and the bus is a very popular means of transport. Manufacturers are working to develop clean buses.

The bus is an ideal mode of transport for discovering Paris. It is also well suited for travel from home to work. The capacity of buses continues to increase with the appearance of articulated buses (called "accordion buses"). To estimate travel time on the map, it takes about 5 minutes between each stop. Of course, the traffic situation is also a factor, even though the numerous bus lanes make it easier to get around. To find your way around more easily, please consult the maps available on our website.

The 353 daytime lines run from 7 am to 8.30 pm on weekdays. These buses are numbered from 20 to 99 in Paris, and from 101 for the suburbs. For the weekend, only half of the network is in operation. 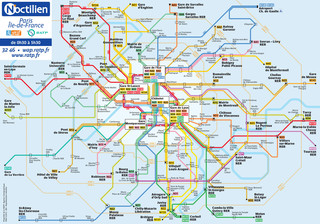 The Noctilien night bus network of Paris which transports 8.5 million passengers per year, exists since 2005 and is operated by the RATP (Régie autonome des transports parisiens) and the SNCF (Société nationale des chemins de fer français).

Its network has 47 lines divided into:

The bus offer in Paris is very varied to ensure optimal mobility on the network. There are night buses (called "Noctilien") that run throughout Paris. 47 Noctilien bus lines take over from the daytime lines and provide rotations between 00:30 and 5:30 am. The Noctilien network, which appeared in 2005, is operated jointly by RATP and SNCF. The Noctilien lines are designated by the letter N.