You can find on this page the map of Paris bike route and the map of Paris Velib stations. The city of Paris has undertaken considerable efforts to develop the use of bicycles by creating miles of trails and bike paths, a system of bike sharing and also cycling routes to move easily in Paris.

Discover Paris and its history by bike in complete safety thanks to its cycling facilities. Discover Paris and its surroundings by bike is the opportunity to visit this city that you think you know in a different way. Lost? Use the map of Paris cycle paths. No bike? Try a Vélib! Too tired to make it back home? Take your bike with you on public transport. 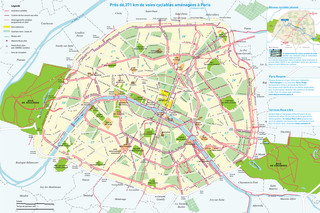 The Paris bike network is about 230 miles (371 km) thanks to a strong policy to develop the dedicated cycle path initiated by the city of Paris. Many dedicated lanes for cyclists have been built to facilitate coexistence with motorists. Bike routes were created to help people enjoy the city.

Paris is criss-crossed by an extensive and ever-growing network of bicycle paths. These areas, designed for safe cycling, can be found on the side of the road, on bus lanes or marked out on certain pavements. They are recognisable by white stripes on the ground, by signs and pictograms representing a bicycle.

Paris is opting for the bicycle with many projects to become the world capital of the bicycle. 63 M euros will be invested to create new bicycle paths. You can consult the state of the works on the city's website.

Along the banks of the Seine or the Vilette and Ourcq canals, here are some ideas for bike rides from Paris:

During a weekend you will be able to discover some of the riches that surround the capital during a bike ride. Forests, castles and tourist sites are within easy reach. 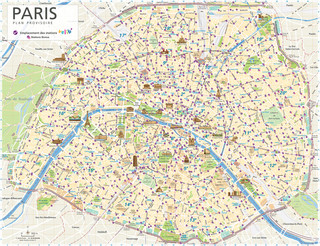 Vélib is the public bicycle sharing system in Paris (France) available since 2007. Established by the city of Paris, the Cyclocity system is operated by JCDecaux. The network is available in Paris and 30 municipalities around and proposes a fleet of 14,000 bicycles spread over 1,230 stations which attracts over 86,000 users per day on average.

Vélib' is a self-service bicycle system available in Paris. In its previous version, Vélib' was managed by a private operator. It was operated during this first period between 2007 and 2017 by the JCDecaux Group.

In 2017, the Smovengo consortium became the new manager of the Vélib' service, which became "Vélib' Métropole" on 1 January 2018. The system now extends to some one hundred municipalities and broadens its offer with the deployment of electrically assisted bicycles. With this market, the Vélib' service becomes metropolitan. It covers a much larger area, better adapted to the lifestyles of its inhabitants.

The bicycles are lighter (20kg compared to 22.25kg at present). They are connected thanks to an on-board electronic box that allows you to geolocate them in real time, display the rental time or know the distance covered during your journey. The data transmitted (total time, kilometres travelled) will enable each subscriber to track his or her use of Vélib'.