Discover also the map of airport connections in the Paris Region and in particular the airports of Paris and its region (Paris-Orly, Paris-Charles-de-Gaulle and Paris-Le Bourget). The means of access to Paris-Charles de Gaulle (Roissy, Paris-CDG) & Paris-Orly airports are reliable and work all night long. 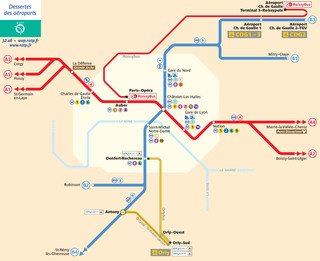 The access to Paris airports: Paris Charles de Gaulle (CDG), Paris Orly (ORY), Paris Beauvais (BVA) is possible by bus or with the RER commuter train. For CDG, you can use RoissyBus and the RER line B, for Orly you can take the OrlyBus or the OrlyVal then the RER line B. Finally for Beauvais, only a shuttle connects the airport to the Porte Maillot in Paris.

Our interactive airport connection map is designed to make your journeys easier. It is available online and can be downloaded in PDF format.

In 2030, Parisian airport connections will be easier thanks to the supermetro. From Roissy, Orly or Le Bourget, all you have to do is jump on an automatic train as you leave the airport to reach the heart of Paris. Orly, since 2024, has a direct connection and is less than 30 minutes from the Gare de Lyon, Châtelet or Saint-Lazare thanks to line 14.
As for Roissy airport (Val-d'Oise), it will have two new connections in 2030. In addition to the RER B, it will be served by the CDG Express, in 20 minutes and non-stop from the Gare de l'Est, as well as by line 17, which reaches Saint-Denis (Seine-Saint-Denis) in less than 25 minutes.

The airport of Paris Charles de Gaulle also known as Roissy Charles de Gaulle or CDG is the main French airport located 14 miles (23 km) north east of Paris. It is the 2nd largest airport in Europe after the London airport Heathrow and the world's seventh largest airport for passenger traffic with 61.5 million travelers in 2012. It has 3 terminals, terminal 1, 3 and terminal 2 that is the main one and includes terminals 2A, 2B, 2C, 2D, 2E, 2F, 2G.

Paris-Charles-de-Gaulle airport was opened in 1974 to cope with the saturation of Orly airport. It bears the name of Charles de Gaulle who was President of the Republic when the airport was created in 1964. The airport is divided between the departments of Val-d'Oise, Seine-Saint-Denis and Seine-et-Marne, and occupies more than half of the territory of the municipality of Roissy-en-France with a surface area of 32 km2. The airport is commercially operated by Paris Aéroport (ADP Group).

With 62 million passengers carried in 2013 by 180 airlines present on the platform, CDG is today the second largest airport in Europe behind London-Heathrow, and the eighth largest in the world.

CDG attracts 700 companies and about 86,000 direct jobs. The economic activity generated by the airport's presence translates into 21.2 billion euros of added value, i.e. 4.1% of regional wealth and 1.2% of GDP. 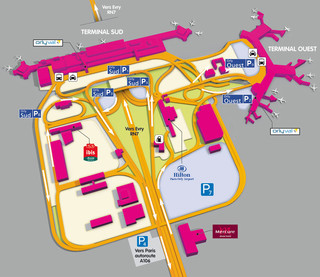 The airport of Paris Orly also called Orly is an important French airport located 9 miles (14 km) south of Paris. It is the 2nd largest airport in France after Paris Charles de Gaulle airport and the 11th European airport for passenger traffic, with 25.2 million travelers in 2010. It has 2 terminals, the South terminal and the West terminal.

Many transports are linking the Paris Orly airport to the center of Paris. You can take to join the capital: the OrlyVal then the RER B, the special OrlyBus shuttle to Denfert Rochereau, the 183 bus to Porte de Choisy, the bus 91/10 to Massy Palaiseau TGV station, the tram 7 towards Villejuif, the Air France bus to Gare Montparnasse or Etoile but also the VEA shuttle to Disneyland Paris.

Paris-Orly airport takes its name from the commune of Orly, part of whose territory it occupies. The airport is divided between the departments of Essonne and Val-de-Marne.

In March 2019, the name of the terminals was changed to include the connecting building, which was commissioned on 16 April. Orly West is divided into Orly 1 and Orly 2, the new junction building takes the name Orly 3 and Orly South becomes Orly 44. It also has a freight terminal and a maintenance area.

The 2000s marked the start of major works and modernisation of the airport: the heart of Orly with its international business district, the new jetty for international flights, the redevelopment of the terminal esplanades, the arrival of the tramway, etc. The airport has become a key economic player for the region. 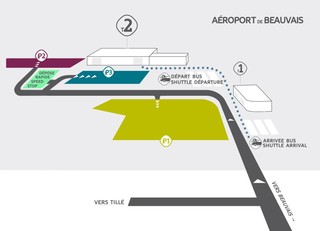 The airport of Paris Beauvais also called Beauvais-Tillé is a French lowcost airport located about 43 miles (70 km) north of Paris. It is the 9th busiest airport in France and the 3rd Parisian airport for passenger traffic with 3.9 million travelers in 2013. It has 2 terminals, terminal 1 and terminal 2.

Paris Beauvais Airport is connected to the capital by a single shuttle arriving at the Porte Maillot in Paris. As for Paris CDG and Paris Orly a VEA shuttle connects Paris Beauvais to Disneyland Paris.

Paris-Beauvais airport is located in the commune of Tillé, 2 km north-east of Beauvais, in the Oise region of Hauts-de-France. The first terminal was opened in November 1979, the second in December 2010 in order to increase passenger traffic. In 2018, the airport was the tenth in France in terms of passenger numbers with 3.8 million passengers.

In order to improve passenger reception conditions, Terminal 2 is built in 2010. From 2011 the airport will be equipped with a landing aid system. In 2014, modernisation work will be in full swing: redesign of the Whisky taxiway, the Terminal 1 aircraft parking area and runway 04-22. In 2015, the bus station is created. It optimizes access to the airport by public transport and improves reception conditions for the millions of passengers who pass through it each year.