Disneyland Paris, formerly Euro Disney Resort and Disneyland Resort Paris, is a tourist and urban complex located for the most part in the commune of Chessy (Seine-et-Marne). 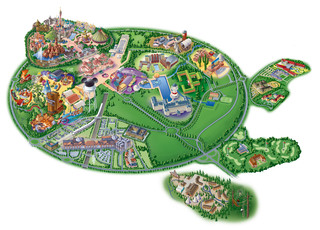 The resort around 2 theme parks is composed by the Disney Village, 7 Disney hotels and 7 partner hotels, the Disneyland golf, 2 shopping centers and 2 train stations, a TGV station and a RER station putting Disneyland 40 minutes from Paris. It was inaugurated in 1992 and reached 15.4 million visitors in 2009.

The Disneyland Park is a Walt Disney Company theme park located in France, in the Val d'Europe sector in Marne-la-Vallée in Seine-et-Marne.

The park does not belong directly to the Walt Disney Company but to Euro Disney SCA. It is one of the theme parks in Europe to have been awarded a Thea Award by the Themed Entertainment Association.

You surely have a favourite attraction. Here are the notes and refer to our map to find it. 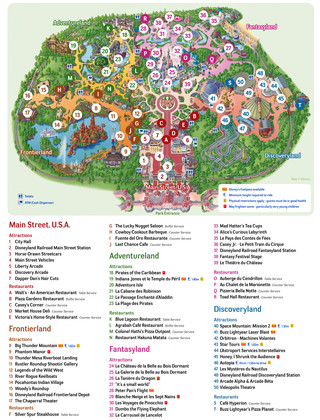 Disneyland Paris is the first theme park of Disneyland resort opened in 1992. The park has 34 attractions on 55 hectares spread over 5 lands or sections: Main Street USA, Discoveryland, Fantasyland, Adventureland, Frontierland.

The site is favoured by numerous transport options, including the extension of line A of the RER Île-de-France RER, which has been in service since 1 April 1992.

The attractions of Disneyland Park are numerous. 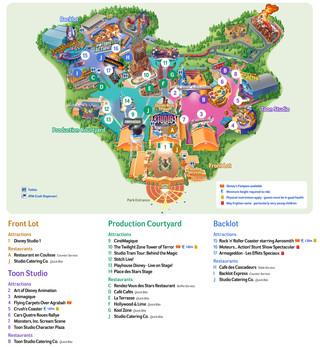 Walt Disney Studios is the second park of Disneyland resort. It opened in 2002, 10 years after Disneyland Paris. It extends over 27 hectares and has 17 attractions spread across Front Lot, Production Courtyard, Backlot, Toon Studio, Hollywood Boulvard and Toy Story Playland.

Originally inaugurated on the theme of cinema, television, special effects and animation, it continues to evolve to focus on cinema themes and even more on those of the newest Disney Studios such as Pixar, Marvel and Star Wars.

Less large than Disneyland Park, the attractions present at the opening of Walt Disney Studios were for the most part exclusive to the park in 2002 with original creations such as Animagique, Cinémagique or Moteurs, Actions! (now closed). The park has evolved at its own pace to gradually forge its own identity. Over time, new Disney attractions were successively introduced at Walt Disney Studios with Crush's Coaster, the Tower of Terror, Toy Story Playland and Ratatouille: Remy's Totally Crazy Adventure.